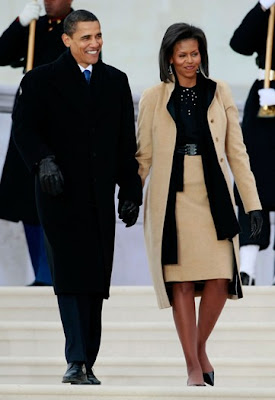 Whether it signified a level of comfort, fidelity, or a Capricorn's steadfastness, incoming First Lady Michelle Obama kicked off the official Inauguration activities wearing none other than Narciso Rodriguez.

Lady O donned a black and red Rodriguez creation for the election night festivities in November, so its not a total shock to see her in another look by the designer.

This time, the color palette was more subdued. Gone was the vibrant celebratory red. In its place, a chic but stately camel-hued high-waisted knee-length pencil skirt, paired with and embellished black knit top. A coordinating Long camel jacket completed the ensemble.

The official KoS review: We Likey!!! This is the type of look that is stylish enough to keep the fashion whores happy, while still being completely appropriate for Michelle Obama's "down-to-business" persona. This is the OPPOSITE of that wacky Thakoon number she wore at the DNC... and that's why we LOVE IT.

So far, our girl is off to a fabulous start...we're keeping our fingers crossed for only good things to come!
Posted by The Maven at 8:04 PM No comments:

Belle of the (Inaugural) Ball

America is just 2 weeks away from what may prove to be one of the biggest Inaugural Ball scenes in history. And while most I-ball excitement is centered around our President-elect and the kick-off to his administration's first 100 days in office, the second, and perhaps most feverish anticipation is about one thing, and one thing only:

WHAT IS MICHELLE OBAMA GOING TO WEAR TO THE INAUGURAL BALL!

I'd venture to guess that never in a million years did Barack Obama imagine that one of the landmark moments of his (and even our collective) lifetime would be defined by his wife's wardrobe choice! But it is, and the fashionistas in all of us are waiting with bated breath...and opinions galore!

I-ball gown enthusiasts have been pouring over desiginer's sketches of possible looks for Lady O's grand entrance. The stylings range from the marvelous, glamorous and chic(Herrera, Lagerfeld, Rodarte) to the bland, horrific, and absurd (Besty Johnson, Zac Posen, I'm talking to you...).

After much debate, and some waffling, the official KoS selection is this glorious Marchesa gown. It just does all the right things in all the right places and demands attention without bludgeoning the onlooker's retna by being garish. With its well-achieved balance of structure and flow, the result is obvious femininity with an overwhelming strength.

So Michelle, if you or your search engine cronies read this in time... WEAR THE MARCHESA... and call me! We have at least 4 years of shopping to do! And after the Dress-that-divided-a-nation on election night, I think another voice of reason in the malay would be beneficial!!! The IRS seems to always know how to find me...greedy little buggers.
Posted by The Maven at 5:39 PM No comments: