Bend it Like Brontë: the return of the Victorian boot 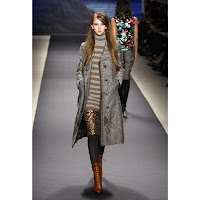 Fashion is always re-inventing itself by taking inspiration from other eras and depositing little bits of the past into our closets of today. I'm generally thrilled when antique and vintage style has a modern resurgence (though, if you ask me, people were a little too eager to pull their stirrups out of hiding), but I was super excited to see many Fall '08 footwear collections showing oodles of looks that hearken back to the late 1800's!

The Victorian age was complicated. Women were looking for new avenues to express themselves in a male-dominated world...as long as it didn't mean showing any ankle skin. Today, almost 90 years after women's suffrage, we've made progress: pay is getting better, choices are actually choices, hemlines are all over the place, and even our toes have cleavage! Even so, conservative tones and silhouettes have returned to runways and showrooms, and romantic footwear could be your fall accessory of choice.

Keep an eye out for these fantastic boots in a month or so, and you'll be feeling like a dramatic character from Wuthering Heights in no time! 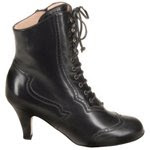 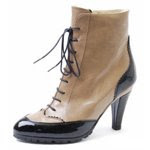 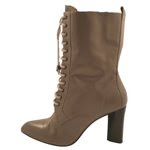 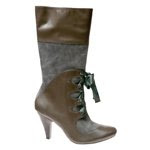 Feminine by Poetic Licence
$195
Posted by The Maven at 7:40 PM No comments:

After two summers of the industry's obsession with the chic simplicity of wearing pristine "Oh God-please-don't-let-your-kid-touch-me!" white, I am happy to see another round of moody cream-colored pieces filtering onto store racks.

The color oracles at Pantone have spoken, and white as we've come to know and love/fear it is moving over to make way for a new generation of the timeless neutral. For Fall '08 and spring '09, off-white returns as the new black. In their fall collections, labels like Max Mara and Chloé are showing delectably creamy items with varied undertones that combine well with the seasons heavier hues of greenish-blacks, muted browns, ochres, and purples. 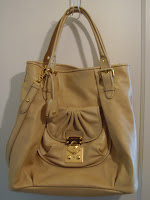 Because of their versatility, a great way to start upping your off-white and cream collection is by way of accessories. I snagged a great Miu Miu tote during the current Barney's sale (if you haven't been been... GO NOW!). For my footsies, I bought the Delman "Cruise" ballet flats, in a soft quilted leather with gold-tone stud work. So yummy. Both pieces are appropriate now, and will work just as well with my fall wardrobe. 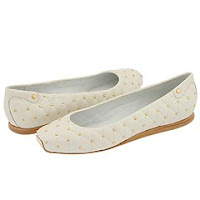 I enjoy the standard pure white, but it was beginning to make me a little paranoid and compulsive (ex: no chocolate or make-up, carrying moist towelettes with me everywhere, standing instead of sitting). With this seasons creams, I feel like I can relax... at least a tad. Finally, I can fully enjoy hugs from my 4 year old God-daughter without thinking about my dry cleaning bill. Life is good.
Posted by The Maven at 9:39 PM No comments:

I hate to be the whiney type, but this whole summer heat thing is getting to me. The recent spikes in humidity have been pushing me and my handy wall-mounted barometer toward a breaking point.

My only saving grace as we creep closer to the half-way mark of this hot-and-sticky solstice, has been good old fashion H2O...and by "old fashioned," I mean imported from France and shoved into an aerosol can!

For years, the Evian Brumisateur has been the go-to beauty product for savvy women worldwide who like to beat the heat while nourishing their skin. As if general consensus and the illustrious name of "Evian" weren't reason enough to add this item to your shopping list, here are a few more:

Added bonus: the Evian Brumisateur comes in 3 different sizes so you can chuck a travel-sized one in your purse, and keep your larger ones at home (...which is way more appropriate than forcing a 14 oz. can into your handbag like moi)!

So if you need me, I'll be napping in front of a fan trying not to sweat, hosing myself down with canned mineral water, and dreaming of autumn with all of its fabulous sweaters and boots! Only 83 days til the equinox!!!

If you love scouring the internet for the best prices on designer handbags, your way of life could be experiencing a few changes, thanks to Lady Justice and some killjoy corporate folks at Louis Vuitton.

On Monday, a French court handed down a decision ordering eBay Inc. and eBay International to pay LVMH Moët Hennessy Louis Vuitton and 4 other companies a total of 38.9 million euros ($61.3 million) for allowing the sale of counterfeit goods and for the unlawful sale of authentic fragrances (Christian Dior, Kenzo Parfums, Guerlain and Parfums Givenchy also took part in the suit). The decision comes after 2 years of legal battles between the luxury goods companies and eBay, and marks the highest fine ever awarded against eBay in Europe.

LVMH, of course, was pleased with the decision, with hopes the ruling will help preserve their name and the status of the brand. The folks at eBay... not so much. To quote the website's rep: "The decisions today are not about the battle against counterfeiting. In reality, it's a matter of a wish by LVMH to protect its commercial practices excluding all competition."

This battle is far from over. eBay has already announced its intention to appeal, though in the meantime, we'll see if they continue to sell the products (and pay the additional $79,000 daily fine if they do!), or if the popular items disappear from their loyal auction-addicted public.

I am not an eBay couture hunter... but I know some people who are going to be pretty hot (not haute) about this one!
Posted by The Maven at 9:05 PM No comments: