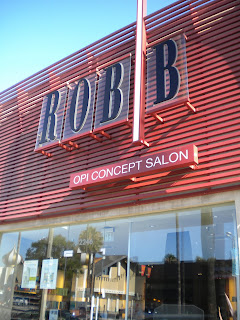 The act of pilgrimage is among the highest demonstrations of devotion. Mecca, Jerusalem, St. Peter's Square--there is something affirming and inspirational that comes with journeying to a sacred space where great teachers and innovators have walked.

For me, a 3rd generation OPI nail lacquer devotee, that place is Studio City, California...12246 Ventura Blvd. to be exact... home of the newly opened ROB|B OPI Concept Salon

The salon, a labor of love and brainchild of Robbie Schaeffer--son of OPIs CEO & founder George Schaeffer, is the unofficial holy land of the 28 year old company... and probably the greatest idea since "I'm Not Really A Waitress." The salon's self-stated objective is "to provide excellent services using OPI products exclusively, while providing a comfortable atmosphere that will enhance our client’s physical appearance and soothe their mind all within a 'green' environment." Ummm... okay that sounds awesome! 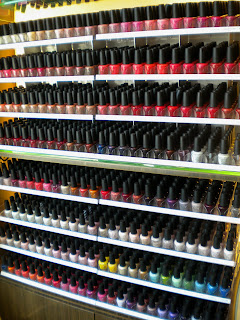 I step into the holy grail and I'm immediately excited. To my right is a nail bar for "mini manis" and a the months featured facial which involed larges glorious chucks of anti-oxidant rich chocolate. To my left was a ginormous selection of OPI nail color! After finding my long lost favorite color "Kinky in Helsinki," I proceed to get one of the best manicures I've gotten in a LONG time...possibly ever. 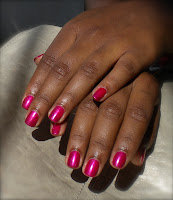 The prices at ROB|B are a little bit higher than the average strip-mall drop-in spots. The Essential Manicure is $30 and includes a hand/arm massage (a real one... not some lady smacking your forearms for 20 seconds). But this is not your average nail salon. I was impressed with the overall health of my nails when I left. From the Avojuice and Nail Envy to the Avoplex Cuticle Oil and the polish itself, my hands were much better when I left than when I came in. Not to mention first time visitors get the world's best "welcome gift" ( I'm not telling what in it, but its worth it)! 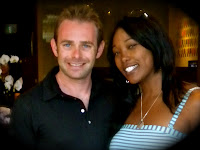 To top off my almost religious experience, Robbie was there in the salon that day, and maybe...just maybe I was happier to snap a pic with him than I was when I got a photo of me and Pooh Bear at disneyworld when I was 7.

My trip only deepened my love for the products that have kept me feeling all grown up ever since I raided my Nana's vanity way back in the day, and I vow that if I ever give birth to a lil' Maven the indoctrination shall continue!!!
Posted by The Maven at 5:57 PM 1 comment:

From the makers of Apple, GOOP, and Moses... 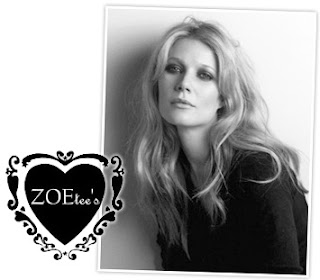 Just in case you were starting to get withdrawal shakes from the lack of celebrity+designer collaborations (insert sarcasm here), a new union is at last ready to hit stores. French comfort couture purveyor ZOEtee's has teamed up with Oscar-winner, blogger, and wacky-name guru Gwyneth Paltrow for the label's new FL09 line "ZOEtee's LOVES Gwyneth." 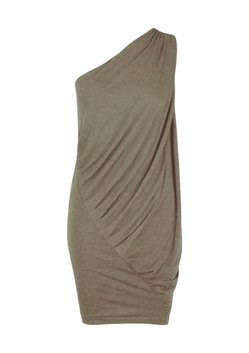 The collection, announced earlier this year, contains luxe jersey knit separates (a hallmark of ZOEtee's) with an almost brooding femininity to their design. The monochromatic (dare, I say drab?!) charcoal and black palette is timeless (read: safe), while the pieces rely heavily on draping and hardware detail.

My major complaint: There is nothing here we haven't seen before.

For MSRPs that start at $550, I need you to come with more than cotton and jersey knit, an Academy Award, and some hippie kid's names! Don't get me wrong, I actually consider myself a quasi-Paltrow fan...and maybe that's why this is so disappointing for me. I expected more than a quirky tunic dress and a sweater vest with metal studs. 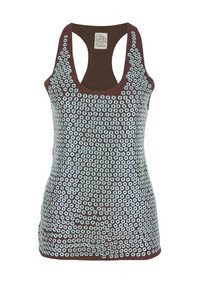 And this is my constant gripe with celebrity collaborations...and often many celebrities who fancy themselves to be designers (AHEM, Scarlett Johansson)...instead of getting amazing inspired fashion, we get a gimmick, a press release, a photo op. And while the celebrity is "rediscovering" or "diversifying their role in world of creating," we the consumers are handed down collections of so-so clothing to wear and encouraged to pay top $$$ for it...all because Pepper Potts (LOVE that character BTW) wants to be a designer. I don't think it's fair.

I'm not endorsing the idea that popular musicians and actors should be one-trick-ponies. Not in the least. All of us, regardless of fame have multiple talents (Paltrow, for instance has become quite the kick@ss foodie, and I would eat at her house whenever). But just don't expect me to get all excited about a collection because it has a celebrity's name on it. Collections should still be expected to stand on their own merit in terms of design and innovation. We expect that from Gwyneth Paltrow on the screen, and it should be no different on the runway.

If you're a die hard Gwyneth or ZOEtee's fan, you won't be as disillusioned as I was, and your loyalty will be rewarded by the proceeds of your purchase going towards the London Kid's Company. If you just like to wear things with celeb names on them, save your money and hit up targets next round of GO International.
Posted by The Maven at 1:14 PM No comments: